Free Shipping On Order Over $249

ONLY while Supplies last!

We are proud to announce our new COLORED Pet Revolution® metal CHILLER Ledges!

TIRED of dealing with heavy wood ledges that trap bacteria?? Our lightweight, safe, anodized Ledges are the future of cage accessories!

The Safe-Coat anodizing process safely seals the aluminum and is easy to clean and will NEVER rust. This gorgeous Coral/Copper color is ahmazing! It changes shades in different lights and angles!

This material stays cool, as chins are prone to overheating, these are a great addition to every cage!

High quality Safe-Coat anodized aluminum for easy cleaning. Will not rust or corrode. Lightweight and the strongest aluminum on the market. Rounded corners, so no chin can injure themselves on sharp edges.

Our unique design of our oval holes make it able to easily attach to any cage. We have our one-of-a-kind solid back plate for optimum stability. All hardware is included.

Do not put in the dishwasher.

***** DO YOU WANT TO MIX AND MATCH COLORS IN YOUR BUNDLE?! :D Just write it in the Notes at Checkout!! Be sure to include: which color for Single Ledge and which color for Double Ledge!!!*****

It took a while to get to this review since I waited a week to install a few ledges, and it took a bit longer for the rats to start using them. First off, the ledges are gorgeous, and the hardware to attach them is next-level “elegant” as opposed to the standard nuts and bolts. You can see from the photo that a lot of thought was put into these details. The ledges are sturdy but because of the length they are a tiny bit “springy,” and initially I worried that the ledges had too much “give” compared to the very sturdy wooden corner shelves the rats were used to, and that the rats would not feel secure enough to use the ledges as more than simple steps to the more stable shelves. At first the rats avoided them — I think partly because they were not used to metal — but eventually they did start standing and sitting on them, and now they even sleep on the ledges. Often I will find a rat on each of the four ledges currently in the cage. I suggest if your pet doesn’t take to the ledges immediately, don’t despair— give it a few weeks at least, and they might end up loving their new chillers! (Pic is Tesla on left ledge, Sagan (black) on right Ledge, and Rorschach (“Rory”) stepping onto the right ledge and looking at the camera.

When we received our happy mail, I was so ecstatic! The tissue paper and how the items were well packed was very organized and charming looking. Our chinchillas love the new four metal ledges in their cage. The metal ledges really keep them cool. Thank you for the extra goodies, too. Our chinchillas really enjoyed them. I would definitely order from PetRevolution again! 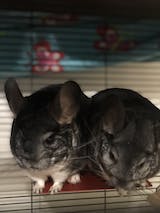 Very well made and stays cooler than the rest of the cage. I will definitely be coming back and buying more supplies in the future. The goodie bag is also an awesome addition.

Our two chins (Paco and Chico) love their chiller ledges! These are a great value; I've spent about the same for wooden shelves. These are so much more durable (our guys are like furry termites!) and easier to clean. We love these and will definitely being buying more.

I can tell, so much care and effort goes into each and every one of these shipments. The tissue paper, stickers, twine wrapping, and the extra treats(!!!) were all so lovely. The fleece itself is beautiful and high quality. I also ordered two 6.5" chiller ledges from their website and they make awesome spots for my boys to hang out (especially when it's summertime). I just love everything about this store.